The Suvarnabhumi International Airport (BKK), is linked to the city by the Bangkok Airport Train, also known as Airport Rail Link.

The train is by far the fastest and cheapest way to get from Bangkok International Airport to the city centre. 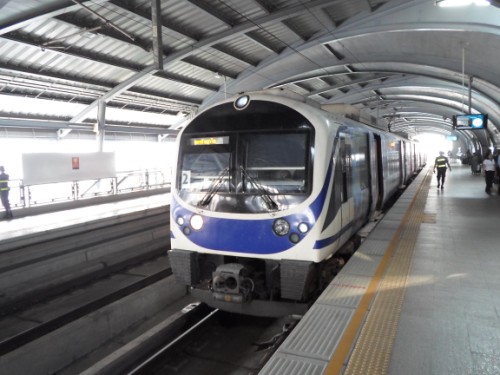 The SA City Line links Suvarnabhumi Bangkok Airport to Phaya Thai in the heart of the city.

It covers a distance of 28 kilometers in just 30 minutes and is linked at Makkasan Station to the Subway MRT and at Paya Thai Station to the BTS Skytrain Sukhumvit line.

Operating Hours : It is opened every day from 6.00am to midnight and a train leaves in each direction every 12-15 minutes from Monday to Friday and every 15 minutes on Saturday, Sunday and Official Holidays.

The SA City Line trains are blue and each train has 3 passenger cars far a capacity of 745 passengers. 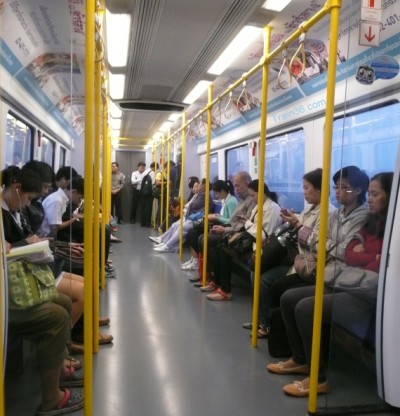 Onboard the city line train

Most tourists travelling with the SA City Line go up to Phaya Thai, Ratchaprarop or Makkasan. 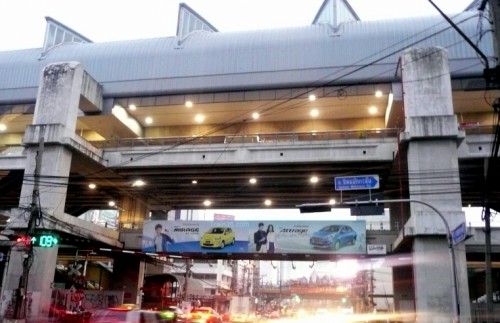 Train tickets for the SA City Line costs from 15THB up to 45THB according to the number of stations. There is a special discount for children and senior citizens.

Train tickets are not actually tickets, but are tokens that can be purchased from either one of the automatic token machines, or directly from one of the ticket selling counters that you can find at each Airport Rail Link station.

Automatic token machines accept 1THB, 5THB and 10THB coins as well as all Thai bank notes and give back controlled change.

There is a pre-paid pass available with a minimum of 50THB up to 1000THB.

Note that Credit Cards are not accepted, neither at the automatic token machines nor at the ticket selling counters.

The closest stations are Phaya Thai Station and Ratchaprarop Station.

From these stations you can take a Metered Taxi to Banglamphoo for around 60-80THB.

A Tuk-tuk will charge you a bit more 80THB-100THB depending on your bargaining skills.

Ratchaprarop Station is at walking distance from Pratunam and many buses are going to Banglamphoo from Pratunam intersection: 2, 79, 511...

There is also a boat service on the canal (Khlong in Thai language) at Hua Chang bridge near the Pratunam Intersection.

From there you can catch a boat to Phan Fa Lilat Pier in Banglamphoo (near Golden Mount, Ratchadamoen Avenue, Lan Luang road).

To know more about the canal boat service in Bangkok go to:

These Extra Trains follow the same route as the City Line and the same fare table.

The train travel on the Makkasan Express Line from the Airport to Makkasan Station takes just 15 minutes.

The train travel on the Phaya Thai Express Line from the Airport to Phaya Thai takes 17 minutes.

Train leaves in each direction every 60 minutes.

The SA Express Line trains are red and each train has a total of 4 cars : 3 passenger cars with 170 passenger seats and 1 baggage car. 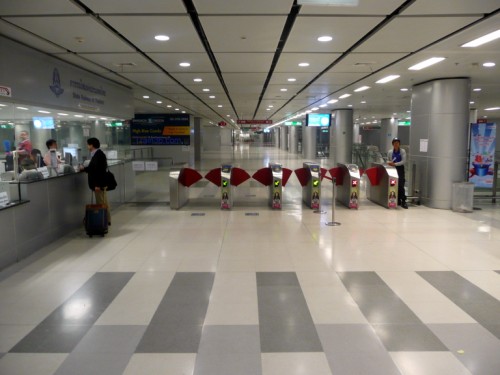 Ticket counter on level B1

The flat price for the SA Express Lines is subject to change, according to the different promotion campaigns.

In fact it used to be priced at a flat price of 150THB and is now down to 90THB.

Like with the SA City Line tickets are actually tokens that can be purchased from any of the automatic token machines or any of the ticket selling counters that you find at the different stations.

Automatic token machines accept 1THB, 5THB and 10THB coins as well as all Thai bank notes and give back controlled change.

There is a pre-paid pass available with a minimum of 50THB up to 1000THB.

Makkasan Station (Bangkok City Air Terminal) which is the origin or the terminal station for the Makkasan SA Express Line and is also served by the City Line is a huge terminal. 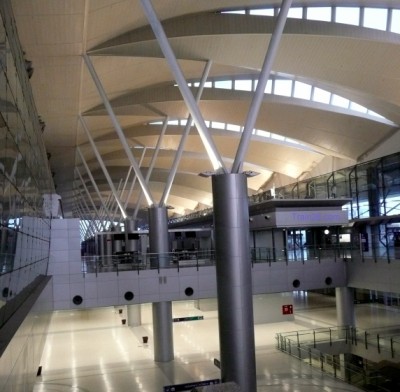 It is far too big for its actual passenger traffic and as a consequence it looks surprisingly empty! 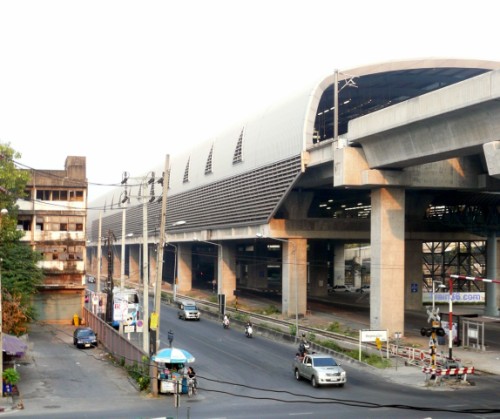 Trolleys for passengers carrying luggage are available at the station.

It has a car park (up to 300 cars and 100 motorcycles) and unlike other stations it has toilets and a check-in facilities for passengers travelling on Thai Airways flights only (except for flights to the USA). 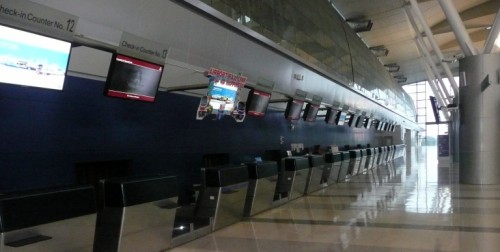 Important: if you are travelling on Thai Airways and want to use the early Check-in facilities: do not try to check-in before buying your token for the SA Express Line.

Contact the ticket selling counter to purchase your token, notify that you have some luggage to check-in and take the receipt (you will need this receipt for the Check-in procedure).

Check-in is opened 3 to 12 hours before the departure of your flight, from 7 am to 9 pm and is free of charge. 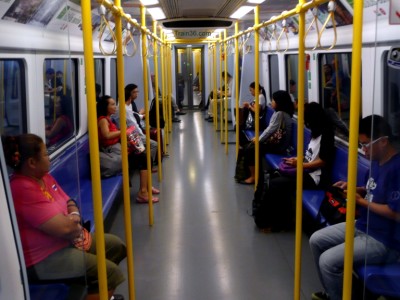 On board the Bangkok Airport Train 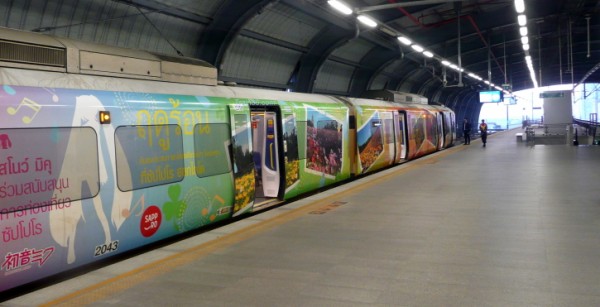 Bangkok Airport Train at the platform

There are plans to extend the Bangkok airport train link to Don Muang airport, but a present you will have to travel between Bangkok's two airports by free shuttle bus or public minibuses / vans.