How to travel by KTM Train in Malaysia, Singapore and Thailand (SRT) using the new fast ETS Express, Commuter and Intercity rail services.

Follow the links below or use the navigation links to find railway timetables, ticket prices and travel information for all the popular train trips in this region of SE Asia.

Travel by KTM Train in Malaysia and Singapore

For other destinations - see our KTM Route page here >

There are only two main lines in Peninsular Malaysia with railway services operated by Malaysian Railways - Keretapi Tanah Melayu Berhad (known as KTM or KTMB).

The main line which travels up from Woodlands Station in Singapore passes through Johor Bahru, Kuala Lumpur, Ipoh, then takes a branch line to Butterworth, where you can catch a short ferry ride over to George Town on Penang island.

The line then heads north into Thailand passing close by the ferry ports to Langkawi island.

The other, less frequented line travels through the centre of the country along what is known as "The Jungle Railway," up to the north-east corner of Malaysia close to Kota Baru and the Thai border.

Here the railway line ends, only to start again on the Thai side of the border, with trains going to Hat Yai Junction and all stations north.

From July 2015, KTM Malaysia Railways started operating the new high-speed Electric Train Services (ETS) on new routes between Gemas - KL Sentral - Butterworth and Padang Besar on the Thailand border, making travel by KTM train in Malaysia much faster than before.

Travel by Train in Thailand (SRT)

Thailand has the largest network of rail track in SE Asia with trains operated by the State Railway of Thailand (SRT) heading out of the capital, Bangkok, in all directions.

The Southern line takes you down along the eastern coastline and connects to ferries out to the islands of Koh Samui, Koh Phangan, and Koh Tao, then down to the border with Malaysia.

The Northern line takes you to the popular destination of Chiang Mai, while the North-Eastern and Eastern lines take you to the borders of Cambodia and Laos.

All these railway lines are served by Bangkok's main train station, Hua Lamphong in the heart of the city.

A short branch line leaves Bangkok from Thonburi station and has services to the west.

This is mainly used by tourists to travel along the infamous "Death Railway" and the Bridge over the River Kwai at Kanchanaburi. 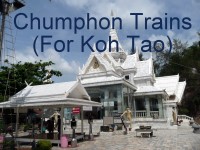 The best way to see any country is to travel by train and SE Asia has a good network of railway lines that connect you from the south in Singapore, all the way up through Malaysia and Thailand to the edges of Cambodia and across the Mekong River into Laos.

In the years to come, there is a planned expansion to connect Thailand to Vietnam and China by rail, by rebuilding the lines in Cambodia and building new railway lines in Laos.

So in a few years time, you should be able to travel overland from Singapore to Europe, via China, all the way by train, without the use of a bus (which is required at the moment).