If you want to know how to travel from KL Sentral to KLCC (Kuala Lumpur Convention Centre) and the Petronas Twin Towers using public transport, forget about taking a bus and getting stuck in KL's traffic jams and jump on one of the regular and cheap LRT trains (Light Rapid Transit) that operate on the Kelana Jaya Line (LRT Laluan Kelana Jaya).

Once you have purchased your token from one of the many the vending machines (see prices below), just follow the signs to the LRT Kelana Jaya Line and take the next train heading in the direction of Gombak.

How long does it take to travel to KLCC from KL Sentral Station?

The duration of the journey by LRT train to KLCC from KLS is just 12 minutes, with trains stopping at the following stations along the route:

The distance (jarak) from KL Sentral to KLCC by LRT train is 5 km.

The KLCC LRT Station is located in the basement of the Avenue K shopping mall with an underground pedestrian linkway connecting the station to Suria KLCC and other developments around KLCC, including the Petronas Twin Towers.

What is the LRT Schedule from KL Sentral to KLCC

The first LRT trains to KLCC start running at 06:00 in the morning.

The last LRT train from KL Sentral to KLCC departs at 00:12 from Monday to Saturday and at 23:42 on a Sunday or public holiday.

The frequency of departures depends on the time of day, with trains departing every 3 to 4 minutes during the rush / peak hours.

At other quieter off peak times of the day, trains depart between 8 minutes and 14 minutes apart.

If you would like to see the LRT train schedule for any particular time of the day and day of the week:

Train fares are slightly cheaper if you want to purchase one of the MyRapid "Touch N Go" cards and go "Cashless."

The cashless fare to KLCC is currently 2.20 MYR.

All LRT times and fares are shown for information only and may change without notice. We recommend you visit the official RapidKL / MyRapid website to check for any changes to schedules before you travel by clicking on the link below: 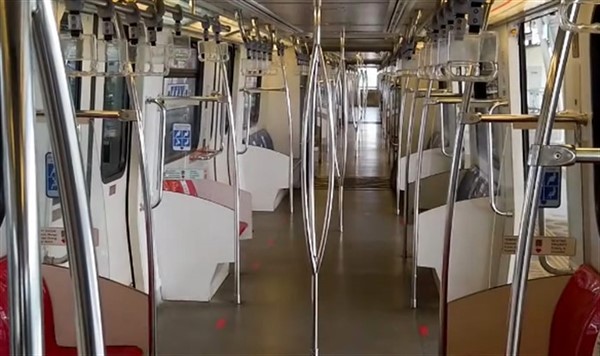 Inside an LRT train

How to travel from the Petronas Twin Towers to Batu Caves >

How to get from Berjaya Times Square to KLCC >