The ETS KL Sentral to Padang Besar KTM train departs a number of times a day from the main railway station in Kuala Lumpur, with the duration of the journey at approximately 5 hours and 30 minutes for the fastest services and with tickets costing between 79 to 102 MYR.

These new high-speed Electric Train Services (ETS for short) can travel at speeds of up to 160 kilometres an hour (with 140 km/h the usual top speed while carrying passengers) and are the quickest way to reach the Malaysia/Thailand border from KL. 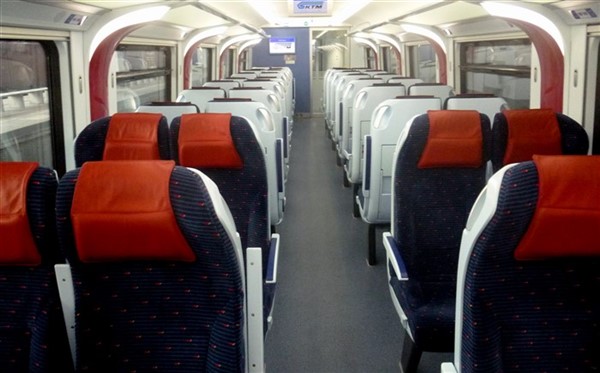 Seats on an ETS train to Padang Besar

Find the Best Places to Stay on this train route:

For the latest ETS train fares from KL click here >

* Operates with the newer ETS2 trains which include a Business Class carriage.

Trains from Kuala Lumpur to Padang Besar have a varying amount of stops along the route, with the quickest trains being the Platinum services. All trains go direct on the North - South railway line (before some services took the branch line to Butterworth).

This new ETS train service between Kuala Lumpur and Padang Besar takes around five and a half hours to get you from the capital of Malaysia, to the border with Thailand.

This cuts the older Intercity Express Trains travel time in half!

If you want to travel from KL to Hat Yai, you will now have to change trains at the border and take one of the new Shuttle services from Padang Besar to Hat Yai (see below for more information).

Book your ETS Tickets from KL to Padang Besar here >

A newer ETS2 train that includes a Business Class coach

Please note: If you are planning to cross in to Thailand, do not take the train arriving late a night - you will be stuck at the station all night as all the border crossings are closed!

When you arrive at the border station at Padang Besar, you are still in Malaysia and will have to go through the immigration and customs checks at the station if you want to continue your journey by train in to Thailand.

Just follow the signs when you arrive at the station, first get your passport stamped out of Malaysia, then get stamped in to Thailand.

Immigration is only opened up shortly before a train is due to depart in to Thailand.

So if you get to Padang Besar well before one of the Shuttle Trains leaves to Hat Yai, you will have to wait around.

The same goes for the Thai Railways Ticket Office.

This only opens around an hour before the Shuttle trains depart.

The other option for passing through immigration is to go upstairs and take the pedestrian walkway  / bridge over the railway tracks to get to the main land border crossing.

You can then walk (10 minutes) between both immigration areas, take a motorbike taxi, or get a taxi to Hat Yai from the other side of the walkway.

As many people will be using these services to get to the southern Thai city of Hat Yai, there are a few options available to you for your journey from Padang Besar Station.

The easiest option by far is to stay at the station and take one of the Shuttle Services to Hat Yai.

The journey takes just under an hour, and tickets are quite cheap, but there are only two services a day, so you may want to cross over at the main land border to take a local bus or minivan (see below).

There is another train that leaves for Hat Yai, the International Express to Bangkok.

However, due to the way fares are constructed in Thailand, it is very expensive for the short trip to Hat Yai, so this service is best avoided and should be used only if you want to travel longer distances (to places like Surat Thani, Chumphon, Hua Hin or Bangkok).

If you are on one of the trains from KL to Padang Besar that arrive well before the Shuttle to Hat Yai and do not want to wait at the station, just head upstairs to the canteen and you will see the bridge leading across the tracks.

You can have a wander around the town (on the Malaysian side), get something to eat or visit the currency exchange at one of the banks.

Or cross the border (the Malaysian immigration area is just a couple of minutes walk away from the train station).

Once you are stamped in to Thailand and come out of the immigration area to the main road, there is a small bus stop on the right (on the other side of the road).

From here there are local, non air-conditioned buses to Hat Yai city centre terminating at the Clock Tower, or get off at Hat Yai bus station for bus connections to all destinations in southern Thailand.

These buses now seem to be less frequent, so if you don't want to be waiting around too long, take the minibus (see below).

The local bus stop for the bus from Padang Besar to Hat Yai (Thai immigration is on the left of the picture where you see the Thai flag flying).

There is also a much more regular minivan service to Hat Yai bus station that leaves from Padang Besar, Thailand town centre.

It's about a 10 - 15 minute walk from the border exit (turn left - walk down the hill to the traffic lights - turn left again - then turn right by the row of banks (currency exchange / ATM's available if you need Thai money) - the minivan station is on the right hand side of the road.

You can also connect with the Shuttle trains to Hat Yai from Padang Besar Thailand Railway Station - you will see the station on your left as you cross the tracks if you walk in to town.

Buying Tickets for the KTM KL to Padang Besar Train

You can buy your ETS train tickets at any Malaysia main railway station or you can book online.

Advance booking is a must for these trains and you should book as far in advance as you can as there are many periods during the year when all seats will be sold out.

ETS Train from KL to Ipoh >

ETS Train from Ipoh to Butterworth >