How to get to and from Chiang Mai Train Station

On this page we give you details of how to get to and from Chiang Mai Train Station by the various forms of transport available in the city.

The train station is about 2 - 3 kilometres east of the city centre, with the Ping River running in between the two. 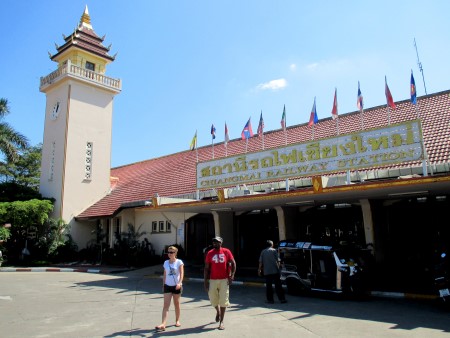 The centre corresponds to the Old city which is surrounded by a moat and by the remains of the old city wall.

It is where most tourist attractions are located and where most people choose to stay. 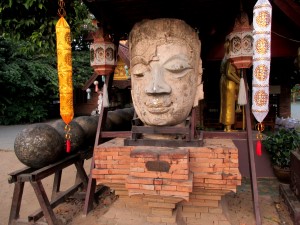 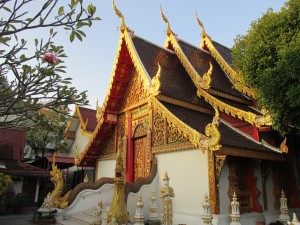 Temple inside the Old city

For people who like walking and who don't carry too many bags, it is actually possible to go by foot from the train station to the city.

If you are heading for the Ping River or the Night Bazaar, it is just a 25 - 30 minute walk.

If you are heading for the city moat and the Eastern gate named Thapae Gate, it takes around 40 minutes. 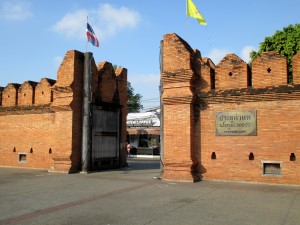 Guidelines to go by foot to Thapae gate:

-          Cross the river and keep walking straight for around 1 km along Thapae Road (ถนนท่าแพ) until you reach the city moat and Thapae Gate.

There are many Hotels and Guest-Houses around this area as well as a Mc Donald’s Restaurant, a Starbucks Café, an Air Asia shop... 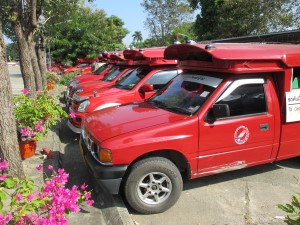 Red Cars at the railway station 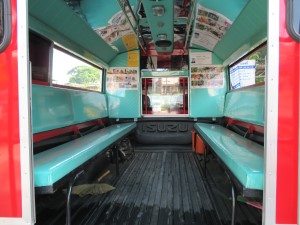 The two benches inside a Red Car

The cheapest way to go to the station is by taking a local "Songhtaew” which are pick-up trucks turned into passenger cars with two benches in the rear and used as shared taxis..

In Chiang Mai these cars are just called Red Cars ( รถสีแดง = "Rot See Daeng") and can be found literally everywhere.

- For any destination within the city area, the fare is set at 20 THB per person.

- For any long distance destination such as from the city centre to the train station, the fare has to be agreed in advance with the driver.

A reasonable price to the train station is 30 - 40 THB per person, but as a foreigner it might be hard to get the driver to agree on that price and may ask for as much as ask as much as 100 - 150 THB pp.

At Chiang Mai train station, you will find many Red Cars outside on the parking lot.

By Tuk-tuk or Taxi 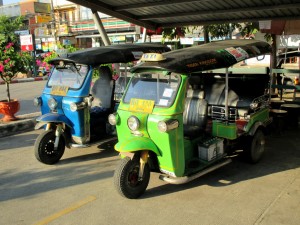 Tuk Tuks in the parking lot at the train station

Right outside the train station you will find Tuk-Tuks: either on the parking lot by the Red Cars or on Rot Fai Road.

From the train station to the city centre expects to pay from 80 to 200 THB depending on your destination and your bargaining skills.

Estimated Tuk-Tuk fares from the the train station:

Unlike in Bangkok, there are very few taxis in Chiang Mai and it is very difficult to make them go by the meter!

If you manage to convince a taxi driver to go by the meter, you might want to know the following:

Flat rate taxi in between downtown and the train station should be around 120 - 150 THB, however at nighttime you might have to settle for 200 THB.

Unfortunately for a beautiful city like Chiang Mai, the public transportation system is kind of nonexistent as well as inadequate and very difficult to fathom!

This situation is difficult to understand, especially because air quality in Chiang Mai is often bad.

Moreover every year from February to April  it becomes even hazardous because of the widespread practice of slash and burn agriculture in Northern Thailand and in its neighbouring countries (Laos and Myanmar).

There are a few city bus lines and a few years ago the city even introduced a fleet of eco-friendly buses, but your major problem will be to find where the stops are as well as the bus routes!

It is really not the best option to travel from or to the train station, but if you really want to explore that possibility: we wish you good luck!

The city moat that surrounds the Old city has the form of a square and has 5 gates.

It can come as handy to remember the names of these gates to direct yourself and to ask for directions: 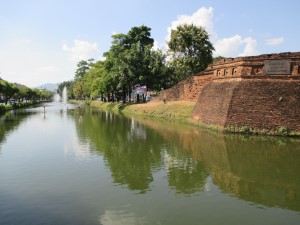