Although the Chiang Mai train is not usually the fastest way to get to Thailand's Northern city, it is by far the most relaxing way to travel, with plenty of sleeper trains available for those who like to get a decent nights sleep while they travel.

Chiang Mai Railway station lies at the very end of the Northern Line and at present services operated by the State Railways of Thailand take a minimum of around 13 hours to cover the whole route from Bangkok.

For information about Chiang Mai Train Station click on the picture link below: 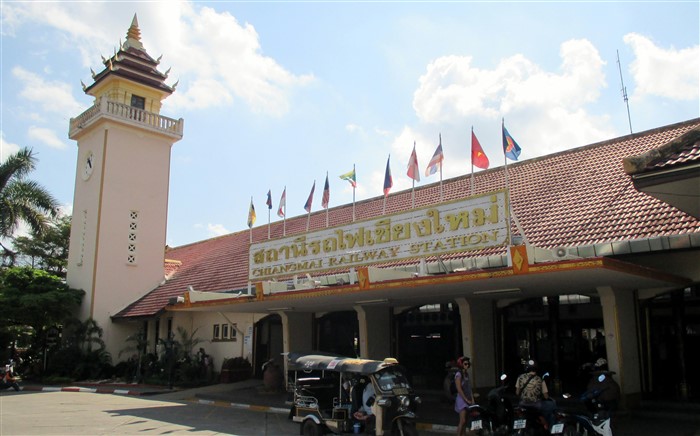 Information about the Railway station in Chiang Mai >

There are however plans for this line to be one of the first high-speed rail services in Thailand, which will cut the travel time down to just three and a half hours!

We are waiting to see if these plans ever come to fruition.

So at the moment you can still enjoy a leisurely journey through the Thai countryside.

This is one of the most popular train journeys in Thailand and there are five trains a day that travel the whole distance.

Most travel overnight and offer comfortable sleeper beds, while the faster DRC trains will get you there quicker, they only offer second class seats.

For time and fares from Chiang Mai to Bangkok click here >

If you plan on travelling south and don't want to stay in the city, you can:

At Bang Sue, you can change on to the SRT Southern Railway Line.

As a faster alternative, there are dozens of buses that travel between the capital and Chiang Mai every day.

Another interesting city to stop at along the Northern railway line in Thailand is Phitsanulok.

There are six trains a day to and from Chiang Mai from the slow leisurely and extremely cheap Ordinary train to the faster Diesel Railcars.

All trains heading to, or from Bangkok on the Northern line stop at the ancient capital of Ayutthaya and is well worth a stop for a day or two to check out the dozens of ruins of Palaces and Temples.

Another intereating ancient town that is worth a visit is Lopburi, famous for it's monkeys and sunflower fields.

At present there is no rail connection between the two cities, but when the high-speed line is built, there are plans to extend the line up to Chiang Rai.

So at the moment you have to travel by bus, but watch this space!

If you wish to travel further south from Bangkok, to places like Hua Hin, Chumphon (for the ferry to Koh Tao), Surat Thani (for ferry to Koh Samui and Koh Phangan) or Padang Besar on the border with Malaysia, you will have to change trains at either Hua Lamphing Railway Station or Bang Sue Junction.

From either station you can then take a train heading south.

Once you reach the Malaysia border at Padang Besar, you can then take a KTM commuter train to Butterworth Penang or a high-speed ETS train to Kuala Lumpur.

Heading further south, the railway line then continues on to Johor Bahru and Singapore.