Travel by Train from Butterworth Penang
to Bangkok Thailand

Train number 36, the International Express or in Malay, the Ekspres Antarabangsa, used to leave from Butterworth railway station everyday as an all 2nd class overnight sleeper service to Thailand's capital city, Bangkok, but now this service originates from the Malaysia / Thailand border station of Padang Besar.

If you are looking to travel from Penang to Bangkok, this is stil the easiest way to travel overland.

The other alternative to travel overland, is to catch a train or minibus to Hat Yai, then a bus from Hat Yai to Bangkok, but the train is much more comfortable.

All times shown are in Thai Time (one hour behind Malaysian time).

****Please Note : This service is no longer departing from Butterworth as the Thai Railways Train is now stopping at the border station of Padang Besar.

To get to Padang Besar you can take one of the regular Komuter Trains from Butterworth.

There is a new service that operates from Padang Besar to Bangkok (train 46).

The Padang Besar to Bangkok train is scheduled to depart at 18.00 Malaysian time (17.00 Thai time).

This train is currently made up of only two carriages between PB and Hat Yai, where you will join with train number 38. Tickets for this service are only for sale at PB Station or you can book tickets online here >>>

Our suggestion is to take one of the Shuttle trains to Hat Yai, where there are more departures heading north to Bangkok every day.

A Komuter train to the border costs 11.40 MYR

Tickets for the train from Padang Besar to Bangkok in second class sleeper coaches (the only coaches available from PB) cost :

Komuter train tickets are not available for advance purchase - you just turn up and buy your ticket for the next departure.

Please Note : Tickets for the SRT train from Pdg. Besar to Bangkok are no longer available from George Town or Butterworth Station and have to be purchased at Padang Besar Station.

We would advise you not to turn up at Padang Besar without a ticket, as this train is very popular and often fully booked well in advance during the high season.

If you want to make an advance booking for the P. Besar - Bangkok sector you can do that online here >>> 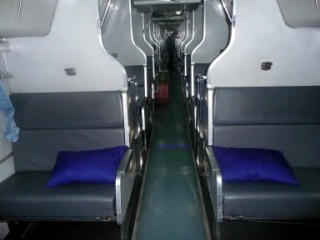 Second class coaches have a total of 40 sleeper seats, which are later turned into beds.

There is an electrical point in the centre of the carriage which comes in handy if you need to charge anything. 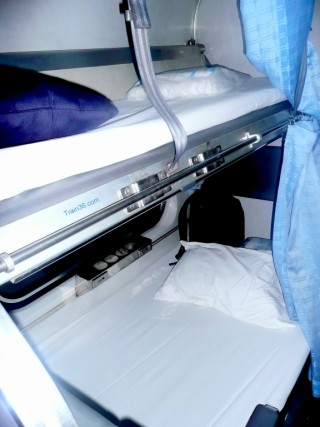 Seats are turned into berths / beds on the international express train 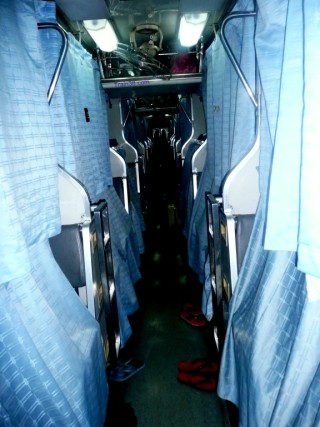 Sleeping berths on Thai trains come in either "Upper" or "Lower."

Lower berth a quite a bit wider than the upper berths and so cost a little more, but are really worth it. They are also the first ones to sell out, so book as early as possible to get that little extra bit of comfort. 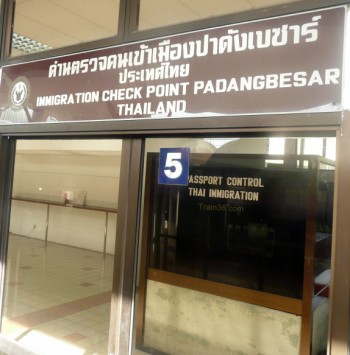 When you arrive at Padang Besar station you will have to go through immigration and customs checks.

Padang Besar station did have a money-changer but is now closed so you may want to bring some Thai Baht with you.

There is a cafe upstairs that serves drinks and snacks (takes both currencies).

Food On the International Express to Bangkok

Once the train arrives in Hat Yai Junction, many more coaches are added, one of which is a restaurant car.

Thai railways staff will come around with a menu (in English) from which you can order your dinner and breakfast the next morning, or if you prefer, you can go down to the restaurant car yourself and have your food there.

If you order from your seat, your food will be delivered to you there and a foldaway table erected to eat off of.

You can also order soft drinks and coffee from one of the crew members (alcohol is no longer allowed on Thai trains).

If you don't fancy the food on-board, either bring your own or try to buy from vendors at the stations.

The train arrives at Bangkok's main railway station, Hua Lamphong, which is within walking distance of Chinatown.

For places to stay nearby the station click here>>>

If you are heading off to other areas of the city you can catch an underground train, bus or taxi right from the station.

Find places to stay in Thailand