The best way to travel from Nilai to Kuala Lumpur city centre is on the KTM Nilai to KL Sentral Komuter (commuter) train that runs on the Tampin to Batu Caves Line frequently throughout the day.

Operated by Malaysia Railways Keretapi Tanah Melayu Berhad (known as KTM or KTMB for short) commuter trains are a great way to get around KL cheaply and are far better than travelling around in a bus as they avoid all the traffic in and around the city.

The first train from Nilai to KL Sentral departs from the early hours of the morning until the last train in the late evening.

To see the KTM Komuter timetable in the opposite direction from KL Sentral to Nilai, please see:

To check for the latest train travel information, you can visit the:

The duration of the train trip from Nilai to KL Sentral takes about an hour and stops at the following station along the route: 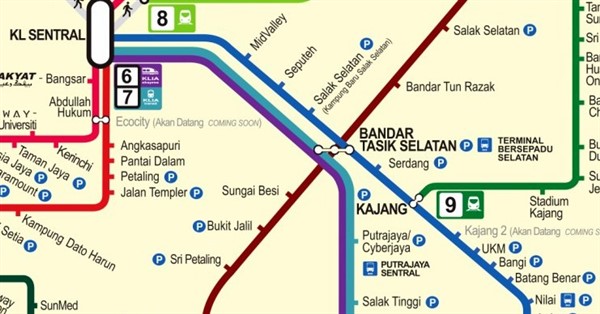 After KL Sentral, many of these trains continue on to Batu Caves (the final stop on the Komuter Line), stopping at

The KTM Komuter cash fare from Nilai to KL Sentral is 7.00 MYR.

Tickets are only sold on the day of travel (no advance purchase is necessary or available).