To get from Sentul to Batu Caves using public transport, by far the easiest way to travel is to take one of the KTM Komuter (commuter) train services operated by Malaysian Railways (Keretapi Tanah Melayu Berhad).

The duration of the journey to Batu Caves from Sentul KTM station is around 13 minutes.

To see the latest Komuter train schedule published by KTM Berhad for services on the route to Batu Caves, click on the timetable link below: 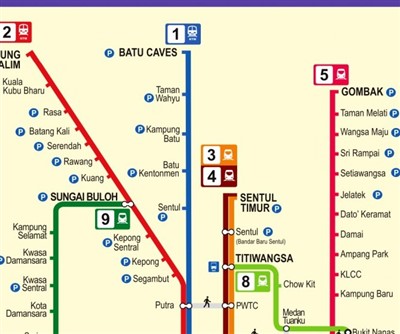 To get to Sentul KTM train station from KL city centre you can take an LRT train on either the LRT Ampang Line or the LRT Sri Petaling Line to either Sentul Timur LRT station or Sentul LRT station.

However, it is quite a long walk from these LRT stations to the KTM train station.

From Sentul LRT station to Sentul KTM station it will take you around 15-20 minutes to walk (1.2 km).

From Sentul Timur station to KTM Sentul station, it will also take around 15-20 minutes to walk (1.1 km).

Other, better options to get to Batu Caves from downtown KL include:

Taking the MRT to Muzium Negara, then take the KTM Komuter train from KL Sentral >

Taking the LRT to PWTC, then taking the KTM Komuter from Putra station >

Taking the LRT to Bandaraya, then taking the KTM Komuter from Bank Negara >

Komuter trains on the route from KTM Sentul to KTM Batu Caves stop at the following stations:

The entrance to the Batu Caves complex is located very close to the train station, just across the car park.

The KTM Komuter train timetables on our site were correct at the time of publication but may change without notice due to operational reasons.

If you would like to see if there is any disruption or changes to the schedule, you should go to the official KTMB.com.my website by clicking here >

The train fare (tambang) for the KTM Komuter to KTM Batu Caves from KTM Sentul is 2.30 MYR (Cash Price).