If you want to travel by train from Singapore to Surat Thani, to catch the boat to Koh Samui or Koh Phangan in Thailand, there are a number of ways you can go about it.

The first part of your journey, will be to decide how to get from Singapore to JB Sentral Railway Station in Johor Bahru, as from July 2015, all KTMB long distance trains are now terminating / originating from JB Sentral Station.

You can travel over the border by bus or take one of the new Shuttle Trains, which take just 5 minutes to go from Woodlands Station to JB Station.

From the 19th May 2016 and the cancellation of all Intercity Express Trains on the N-S Line , your next step is to get a Shuttle Train from JB to Gemas.

From Gemas, the new high-speed Electric Train Service (ETS) starts with ETS Trains heading north, all the way up to the border station at Padang Besar.

Travel on the early morning service or the night train.

Don't plan to arrive there on the late train as all the borders will be closed and you will be stuck there until morning (there is a place to stay on the Malaysian side of the border - it is in the first block of shops as you walk down from the border checkpoint).

Once you get to the border, you can either :

1) wait for the afternoon Shuttle Train service to Hat Yai, then take a train from Hat Yai to Surat Thani.

2) Wait for the International Express Train that will take you to Surat Thani.

3) Cross the main land border and take a local bus from just in front of the Thai Immigration area to Hat Yai bus station. Then take a bus or minivan to Surat Thani or direct to Koh Samui / Koh Phangan. 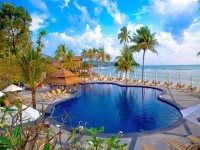 Going via KL Sentral will require a minimum of five different trains to get to Surat Thani.

From KL Sentral Railway Station you can then choose to go straight to Thailand on the ETS Trains from KL to Padang Besar located on the Thai / Malaysia border.

Travel from Padang Besar to Surat Thani as per above.

Train from Singapore to Surat Thani via the Jungle Railway Line

The least travelled route to Surat Thani by train is via the Jungle Railway Line that travels up the centre of Peninsular Malaysia, ending up close to the border with Thailand.

There is a reason why this is the least travelled route!

One, because it is the longest way.

Two, because it means you have to travel through the troubled provinces of South-East Thailand, where attacks on trains have happened in the past. So before you set off - we recommend you check the latest information from your own embassy and the latest local news!

If you still want to travel this way - here is what you can do.

First catch a train from JB Sentral up to either Kota Bharu (Wakaf Bharu station) if you want to stay there, or Pasir Mas station.

From either, you will have to catch a bus or taxi to the border.

Once you cross the border, Sungai Kolok Railway Station is just a few minutes walk away.

From Sungai Kolok, there are a few trains a day leaving for Bangkok which all stop in Surat Thani, or you can catch a more regular train to Hat Yai first and then continue from there.