The KTM Teluk Gadong Station (Stesen Keretapi Teluk Gadong) is located in the district of Klang, Selangor, and is a stop for KTM Komuter trains (commuter) on the Port Klang Line with regular services to Kuala Lumpur KL Sentral station with some services continuing to Tanjung Malim in Perak state.

KTM's commuter train services operate on this route from early in the morning until late in the evening.

Train services operating on the route from Teluk Gadong travelling to KL Sentral and Tanjung Malim stop at the following stations:

Kampung Raja Uda, Jalan Kastam and the terminal station for the Komuter route (the end of the line) at Port Klang (Pelabuhan Klang).

At KL Sentral station you can change trains and connect to Komuter services on the Batu Caves to Pulau Sebang / Tampin route.

These trains will get you to popular destinations such as TBS Bus Terminal (via the Bandar Tasik Selatan KTM Station), Seremban and Tampin (for bus/taxi to Melaka) or for connections to the Shuttle Train services into Johor state (terminating at JB Sentral station in Johor Bahru) and onto Singapore.

For long-distance train services on KTM's Electric Train Services (ETS) you can also connect from KL Sentral station with fast trains travelling all the way up to the Malaysia / Thailand border at Padang Besar.

To see the latest ETS train schedules, see the following pages on our site:

Other trains to get you around the city include:

KLIA Express and KLIA Transit trains to the KUL Airport > 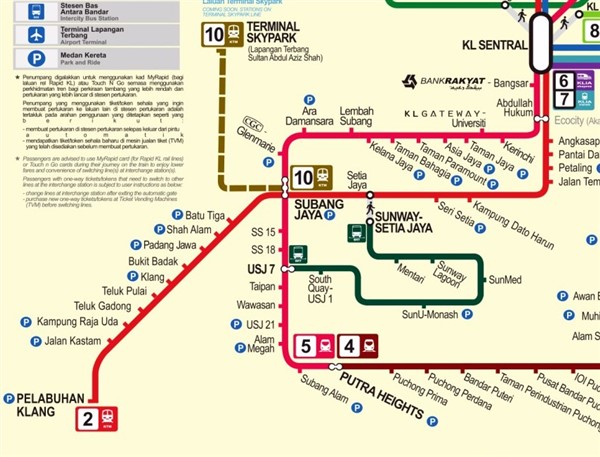